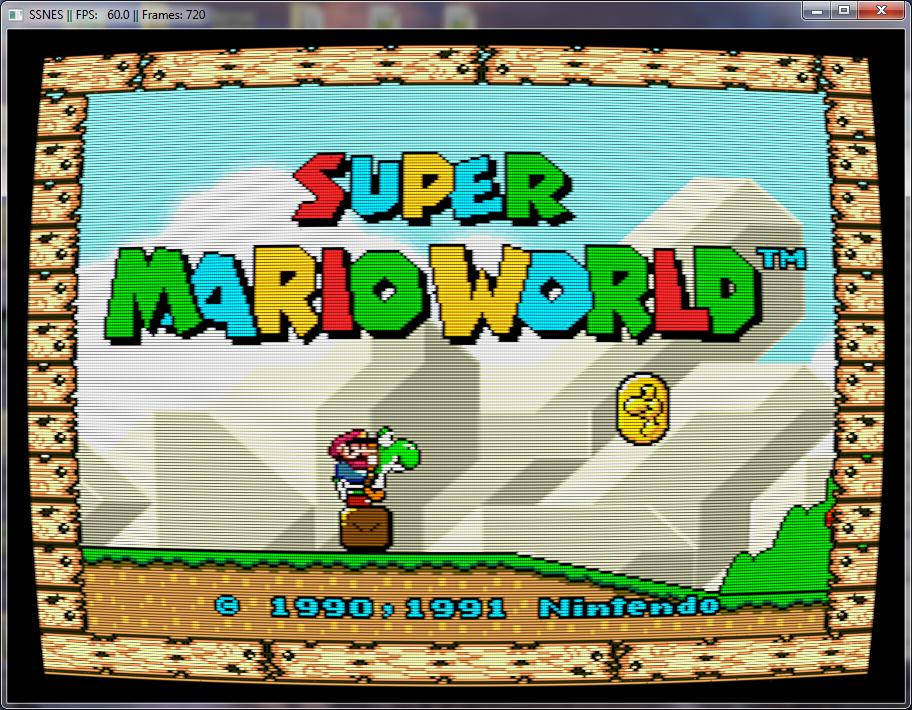 This is the latest and greatest version of the collaborative CRT shader. The screen curvature is user-definable, based on changing a single value in the helpfully commented shader code. As you can see, it looks totally amazing. It also runs a lot faster than it used to, so give it a shot even if your machine couldn't handle it before.

For the sake of this Forum's members/readers and given that it seems to be quite the next big story in emulation sites these days, I guess I ought to give my thoughts -- They're far from perfect. Both of them. If they're trying to mimic very poor-quality CRT's, they're serviceable, I guess, but that's a really silly approach, if you ask me. To quote Eboshidori from one year ago:

Many people in the emulation scene wants to recreate the feel of the CRT, but they have in mind that the picture tube gives "genuine" dirty visual, with lots of defects. They focus on the bad points (not on the right behavior of the beam under the best conditions). I can't stand this, because I'm an ardent supporter CRT precisely because this technology gives you the best picture at any resolution, if you feed it with a good signal. 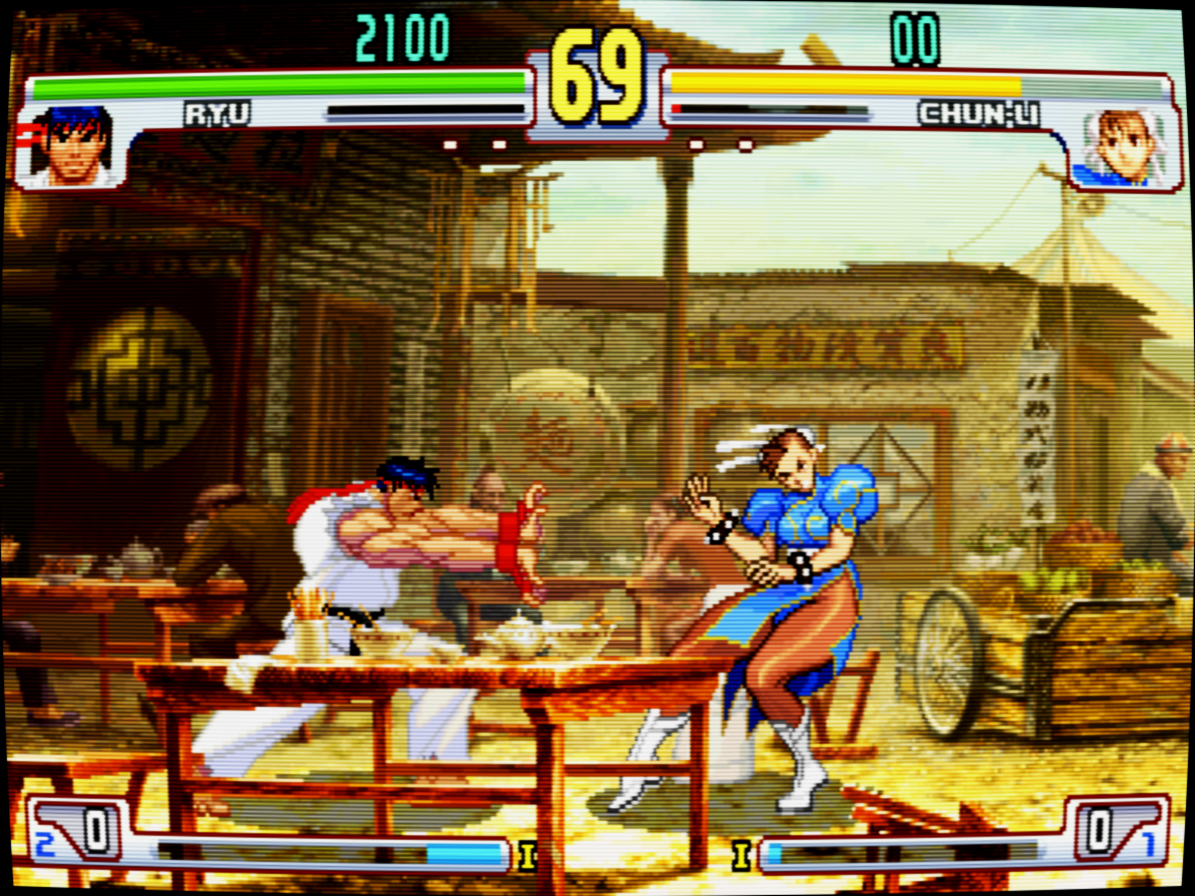 ...but I'm not confident at all on how that actually works in motion -- most games need to use an anisotropic scaling for a 4 : 3, full-screen ratio, to start with. And anyway, that still would not be perfect especially on an LCD display, and only works with highly intricate graphic styles like the one above: 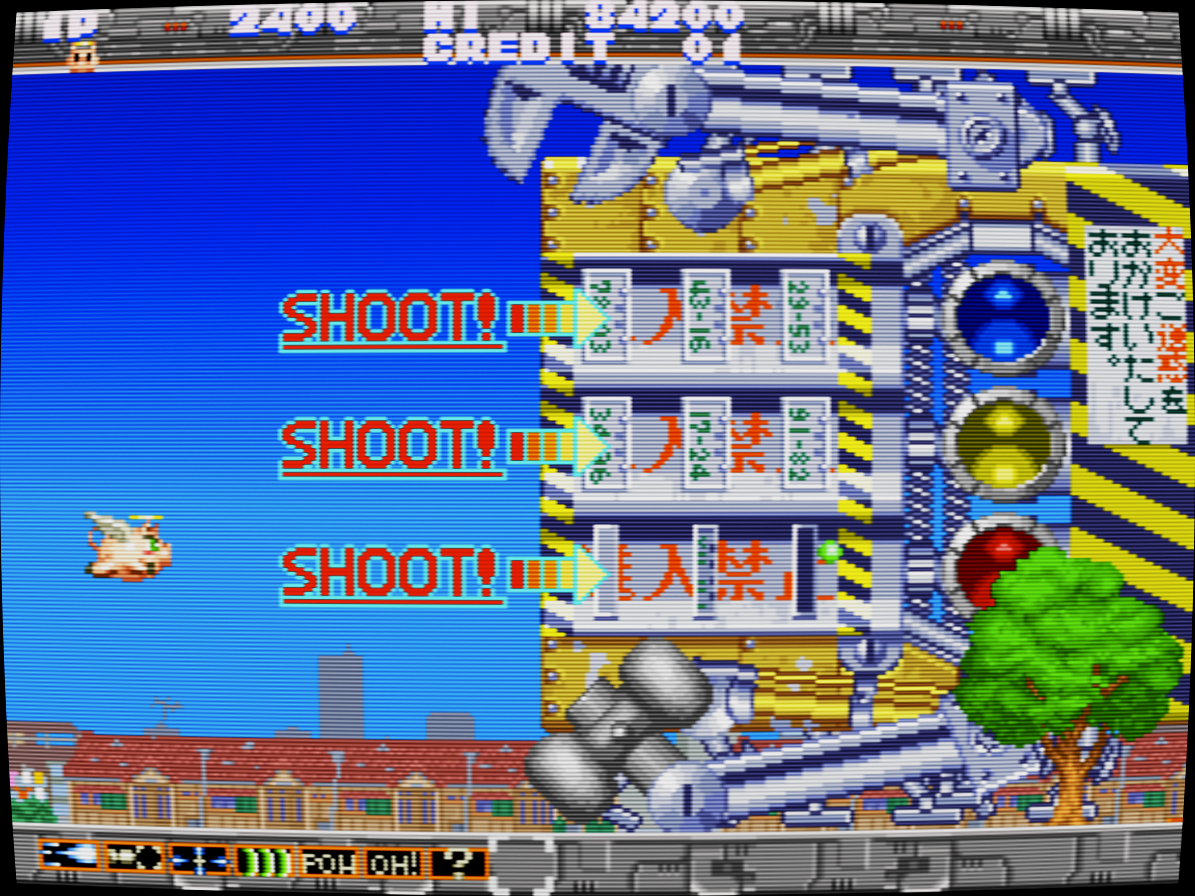 Eboshidori's samples were a much better approach than the HLSL filter (not to mention BSNES') since he was trying to replicate tension mask/Trinitron's grid. The problem is that it needs a way higher resolution for acceptable results (one which is quite higher than current LCD benchmarks, by the way). I wish I could link to his samples here, but he did it in our hidden subforum and I believe he prefers to wait till it's finished before unveiling it publicly. Ronan again tried to apply a bidirectional pattern at lower resolutions, but failed:

The problem, beyond LCD's inherent issues --which will be hardly avoidable until we're on Super High Vision [ > ] or above--, is the lack of experience with good CRT's and good RGB signals, even with those in the emulation scene. The lack of proper visual documentation, given the difficulties to capture the CRT picture as it actually is also helps: Also, that Neo GAF thread is priceless. It's sad to see there're still so many people believing that "pixels" = "legos" and the general ignorance of what 'RGB' really means, but at least, aside from the pixel artist wannabes and the miseducated DOS Poorman Generation, you can see more and more people pointing in the right direction with the time when these discussions emerge. My educational efforts in this regard are becoming visible; can't even question that now.

Hi! I have not posted for a while because I have not made any real progress on the screenshots yet, but I could not resist to show the filter proposed in SF3.3 Online Edition.

Yeah; I already laughed at that in the game's thread. I linked to the latter screenshot at its actual resolution, if you're curious about it. Seems the game's in Western hands once again.